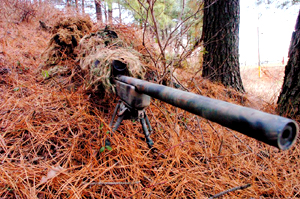 Dressed to Kill takes on a whole new meaning in the SEAL Teams. When SEALs jock- up for a mission the fat lady is singing. Special operations require special equipment to do the job right and do the job well. Navy SEALs train constantly with the tools of the trade, tools which become an extension of themselves. Each piece of equipment or vehicle is tested rigorously in training and proven on the field of combat. The SEALs rely on this specialized equipment for their own lives and for the lives of their teammates. This site organizes SEAL equipment and support vehicles under the elements that they are used in or on – Sea, Air, and Land.

Water is the most demanding and unforgiving element to work in or on. A Navy commando needs to be physically and mentally prepared to face the unpredictable twists and turns that Mother Nature and Murphy conspire to throw at him. Navy commandos also require durable and proven equipment, which enables them to project their power and unique talents from a launch platform onto enemy land or harbors.

From the Air – an effective method of insertion to hard to reach places. SEALs utilize several different forms of insertion from the air. Static Line and Free Fall Parachuting, Fast-Rope and Rappel Operations, or just plane jumping out of a helo into the ocean with a zodiac are all common. Extracting from a mountain-top is made possible with the Special Insertion/Extraction” (SPIE) rig. During the early SEAL years testing was done with the Fulton recovery system (also called the skyhook), which utilized an aircraft to “hook” a line attached to a balloon at the top and a SEAL at the bottom, whisking the SEAL off the ground at 120 knots. The SEAL would then be drawn into the aircraft as it exited the danger area. This technique was discontinued when Petty Officer Fox’s line snapped and he fell to his death in the San Diego Bay. The Fulton recovery system is used today for heavy equipment extraction from remote areas. This page will give you an overview of the most common air insertion techniques and the equipment required to accomplish them.

Deep in a tropical rain forest, invisible men from SEAL Team ONE creep through the foliage, blending with their surroundings and silently signaling their movements through the ranks. Dressed in jungle fatigues, carrying CAR 15’s with M-203 grenade launchers, two M-60’s and a shotgun for close-in work, these SEALs are right at home. Across the world in a different time zone, a SEAL Team TWO sniper team sets up on a ridge in Eastern Europe to observe the movement of Rebel troops in Bosnia. Clad in cold weather gear and arctic over whites, they carry high-powered satellite communications gear, spotter scopes, GPS, and the SASR .50 caliber sniper rifle. The men work silently and efficiently – oblivious to the sub-zero temperature. Across the ocean in the Sahara Desert, a squad from SEAL Team THREE clad in desert cammies move out on a downed pilot rescue mission in their two Desert Patrol Vehicle dune buggies. Equipped with an M-60, .50 cal Machine Gun, a 20mm gatling gun and two AT-4 rockets each, the DPV can pack a mean punch if need be. This mission calls for speed and concealment though, as an American’s life hangs in the balance.

SEALS operate in all climates and all terrains. Each Team specializes in a particular region of the world – their “AO,” or Area of Operations. Special tactics, techniques and gear have been developed over the years to enable the SEALs to excel in any environment – jungle, arctic, woodland or desert.