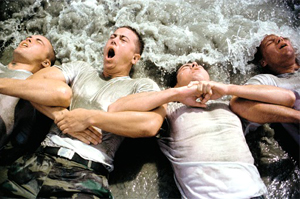 BUD/S is a 6-month SEAL training course held at the Naval Special Warfare Training Center in Coronado, CA. You’ll start with five weeks Indoctrination and Pre-Training as part of a Navy SEAL Class, then go through the Three Phases of BUD/S.

First Phase is the toughest. It consists of 8 weeks of Basic Conditioning that peaks with a grueling segment called “Hell Week” at the midway point, where you’ll be tested to your limits.

Hell Week is a test of physical endurance, mental tenacity and true teamwork where 2/3 or more of your class may call it quits or “ring the bell.” Physical discomfort and pain will cause many to decide it isn’t worth it. The miserable wet-cold approaching hypothermia will make others quit. Sheer fatigue and sleep deprivation will cause every candidate to question his core values, motivations, limits, and everything he’s made of and stands for. Those who grit it out to the finish will hear their Instructors yell the longed-for words, “Hell Week is secured!”

There will be an exceptional few with burning desire who persevere when their bodies are screaming to quit, yet continue on. These men experience a tremendous sense of pride, achievement, brotherhood and a new self-awareness that, “I can do anything!!” The most outstanding among them — that man whose sheer force of example inspires his classmates to keep going when they’re ready to quit – is the “Honor Man” of the Class.

These determined men will proceed on to Second Phase (8 weeks of Diving) and Third Phase (9 weeks of Land Warfare). Most men who have succeeded in Hell Week make it through these phases. If not, it’s usually due to academic issues (e.g., dive physics) in the Dive Phase, or weapons and demolitions safety/competency issues in the Land Warfare (weapons and tactics) Phase. After BUDS is completed, trainees go through 3 weeks of Basic Parachute Training.

At this point, training shifts from testing how the men react in a high-stress “gut check” environment, to making sure the trainees are competent in their core tasks. The men go through a final 8 weeks of focused SEAL Qualification Training in mission planning, operations, and tactic, techniques and procedures. Upon completion, they are authorized to wear the coveted Navy SEAL Trident insignia on their uniform.

SEAL training ends with the formal BUD/S Class Graduation. Here the proud few in their dress Navy uniforms are recognized for their achievement in the presence of family and senior SEAL leaders. The Commanding Officers and senior enlisted advisors of the Naval Special Warfare Groups and SEAL Teams attend. The BUD/s graduates, as their newest Teammates, will be reminded of the special group they have entered, to be worthy of the sacrifices of the courageous Frogmen who came before them, and the great honor it is to serve as a U.S. Navy SEAL.