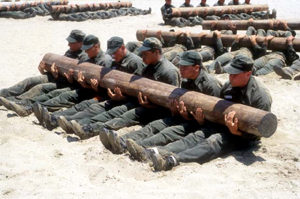 Hell Week is the defining event of BUD/S training. It is held early on – in the 3rd week of First Phase – before the Navy makes an expensive investment in SEAL operational training. Hell Week consists of 5 1/2 days of cold, wet, brutally difficult operational training on fewer than four hours of sleep. Hell Week tests physical endurance, mental toughness, pain and cold tolerance, teamwork, attitude, and your ability to perform work under high physical and mental stress, and sleep deprivation. Above all, it tests determination and desire. On average, only 25% of SEAL candidates make it through Hell Week, the toughest training in the U.S. Military. It is often the greatest achievement of their lives, and with it comes the realization that they can do 20X more than they ever thought possible. It is a defining moment that they reach back to when in combat. They know that they will never, ever quit, or let a teammate down.

Over the years, research has been done to determine a common trait in those individuals who make it through Hell Week, without definitive answer. They are not necessarily the largest or strongest men, nor the fastest swimmers, but those with burning desire to be SEALs. BUD/S Instructors have observed only one true predictor of which candidates will ultimately succeed – it’s those who want it the most — you can see it in their EYES!

Trainees are constantly in motion; running, swimming, paddling, carrying boats on their heads, doing log PT, sit-ups, push-ups, rolling in the sand, slogging through mud, paddling boats and doing surf passage. Being still can be just as challenging, when you’re standing interminably in formation, soaking wet on the beach, or up to your waist in the water, with the cold ocean wind cutting through you. Mud covers uniforms, hands, faces – everything but the eyes. The sand chafes raw skin and the salt water makes cuts burn. Students perform evolutions that require them to think, lead, make sound decisions, and functionally operate when they are extremely sleep-deprived, approaching hypothermia, and even hallucinating. While trainees get plenty to eat, some are so fatigued that they fall asleep in their food. Others fall asleep while paddling boats and have to be pulled out of the water by teammates. Teamwork and camaraderie are essential as trainees alternately help and encourage each other, to hang in there and not quit.

Safety is always adhered to.  Medical personnel are on hand during all evolutions to take care of emergencies and monitor the exhausted trainees.  Throughout Hell Week, Instructors with bull-horns entice trainees to quit, mimicking the inner voice that tells you to give in to your physical pain.  The Instructors make it easy, even honorable, for students to come out of the cold: simply ring the bell that signals defeat, and enjoy doughnuts and coffee in front of your suffering former classmates.  Because the SEAL community is so small, the Instructors know that they will likely serve in future combat operations with those trainees who pass.  Therefore they rigorously test and critically assess which trainees have the SEAL Ethos, physical ability and character to save their and other teammates’ lives.

SEAL candidates commonly have the mistaken belief that Hell Week and BUD/S are all about physical strength.  Actually, it’s as much mental as it is physical.  Trainees just decide that they are too cold, too sandy, too sore or too tired to go on.  It’s their minds that give up on them, not their bodies.  While Instructors could get anyone to quit if they wanted to, that’s not what they’re after.  They apply great physical and mental stress, sow the seeds of doubt, and give tempting invitations for trainees to quit.  It’s up to the individual student to either turn it into increased resolve, or decide on his own to quit.  The majority of the students who make it through Hell Week go on to graduate BUD/S and become SEALs.  Having survived that severe trial, they feel literally unstoppable — that they can do anything.  They have earned a place as one of the elite Navy SEALs the United States sends to do the “impossible” during times of war.

Read the Hell Week chapter from the Jeff Kraus’ book, “You Want Me To Do What?”