So I am at my local gun store getting paperwork done to purchase my Noveske 10.5 low-pro, and while talking with the sales rep at the counter we strike up a conversation on politics and the current doom of the gun culture future. While shuffling forms around, he asks for two forms of I.D. I hand over my CCW and military I.D. (ret). I don’t know if he is smiling at my goofy picture or what, but he has to ask what service I retired from. I give him the cliff notes on my stint in the Navy and he asks the impending question, “What’s swik?”

I kindly tell him that it’s Special Warfare Combat Crewman (SWCC), and get a blank stare. Okay, then I go with fast boats, and yet another blank stare. “Have you seen Act of Valor? We’re the guys on the boats with the big guns.” Then a light bulb goes off, but then it gets snuffed out with, “Aren’t those SEALs?” Well, no, but I would have loved to see the face of one of my Frog friends at that answer. Simple mistake, but I hope to clear the air a bit.

With a rum down, my writing skills seem to improve, at least to me (advice taken from Bukowski), and with that I hope share with you what I know about Boat Guy Life. If you are just a bit curious on what a boat guy is or does then please go to the official Navy SWCC recruiting site to see what the current standards are. All the specs on weapons and gear are available on great sites like this one and SOFREP and some others. Just be careful on what you read, it might be just plain crap. So grab your stool, belly up to the bar my friend and I will tell you what I know.

Training today is the same for all. I’m aware that all NSW training is combined and it’s only after Hell Week that it is separated between “boat phase” and “dive phase.” This is a recent change – previously SWCC training was only nine weeks and separate from BUD/S.

This is where is gets sticky. It was common for at least a quarter of a SWCC class to contain BUD/S drops. This meant that guys who were medically rolled or for some reason were dropped from SEAL training were given the chance to remain in NSW by completing SWCC School.

Take it at what you may, but I have met and know some good Frogs who were Boat Guys first. SWCC for some is a platform to jump into the SEAL Teams, for others it is where they are most useful and most happy. What ever your opinion is, don’t think for one second it is any easier. The mission might be different but the stress and difficulty is the same.

The phrase “cold, wet and tired” is universal among the NSW community, but the SEALs get to move around after getting inserted. Boat Guys have to remain in the area, still wet, cold, tired and bobbing up and down in the middle of the friggin’ cold ocean. Funny that the recruiting videos and Hollywood movies forget that part. Their portrayal is usually sunny days with perfect conditions and shirtless temps during the day, not to mention the cooler of suds and bikini babes hanging around.. LIES!

It’s a tough job because you are working with a bunch of guys who are counting on you to get them where they need to be, and to bring them back home so they can do it all over again. It starts with your detachment being given a warning order consisting of the mission and who you will be working with. Hello to a long day.

The navigator has to plan out the route of insertion and extraction, and a backup plan in case the primary goes to crap. While he is doing, that the engineer is making sure the boat is ready: fueling, daily maintenance, hull integrity and the such. The coxswain (the boat captain) is talking with his SEAL counterpart about the mission itself and getting all the particulars: number of men, equipment weight, etc.

Then there are com checks with the air asset and the SEAL com guy, which if everything runs smooth should be pretty quick, but usually something is jacked up (most of the time somebody loaded the wrong crypto) and it will take forever to get everybody on the same page and with a successful com check. Then there is fuel and ammo load before you get a chance to eat before the brief-back.

This might take an entire day and into the night if everything falls into place with no hick-ups or glitches. It is important for you to know that each crewman has a part in mission success and any failure by one is a failure for all.

There is a lot more, but just talking about mission prep is pretty in depth. In future articles I will give more information on mission and post mission responsibilities. At least this is just a part of the difference and reason of having Boat Guys separate from the SEALS. The work load would be too much for anybody for a successful mission. SEALs are experts of what they do and the Boat Guys are masters of what they do. A pretty good combination if you ask me. Cheers. 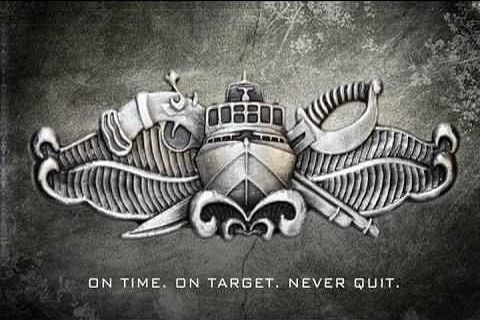